2 Reading Through a Critical Lens

A critical theory is simply a lens through which to look at literature. Imagine putting on a pair of 3D glasses in a movie theater—suddenly things start popping out at you. Though the film hasn’t changed, the way you see it has. Think of applying a critical theory to a text as putting on a pair of 3D glasses that help certain themes to pop out at you and amplify the meaning of the story.

Though there are many different critical/literary theories, we will focus on just a few in this course. Since our purpose is to discover the voices of women through history, it’s important to read texts with a lens that allows us to really learn more about the women who inhabit the spaces of those texts, whether as authors or as characters in them. Since we are studying Women in Literature, one of these lenses is Feminist Critical Theory, which asks us to read literature through a lens that highlights the voice and agency (or lack thereof) of women. Another helpful lens is a combination of Author-Based/Historical criticism, which asks us to read a text through the lens of the author’s own experience and historical context.

First and foremost, any discussion on feminist theory should start with a definition of feminism. Such a discussion must acknowledge that there are many different types of feminism and, even within a specific branch of feminism, there can be widely differing perspectives.

Scholars have divided and named different branches of feminism in varying ways to reflect these different perspectives. Regardless, the primary reason for the existence of feminist thought is “to end oppression, discrimination, and violence directed to women and to acquire full equality and human dignity for every woman” (Clifford 2001, 13). The overriding goal is to ensure that all women have an equal voice and equal representation in every area of life.

Please take a look at the chart below from egafeminist.blogspot.co.uk. This chart shows a range of feminism from the 1st wave beginning in the 1830s to the 3rd wave of the 1980s. Early feminists looked for equality of opportunity for individuals, believed that gender is influenced by biology, and saw the law and society as the root cause of inequality. In contrast, later feminists looked for equality of outcome for the collective, believe that gender is a social construct, and see society and institutions, capitalism, and language as the root of inequality. 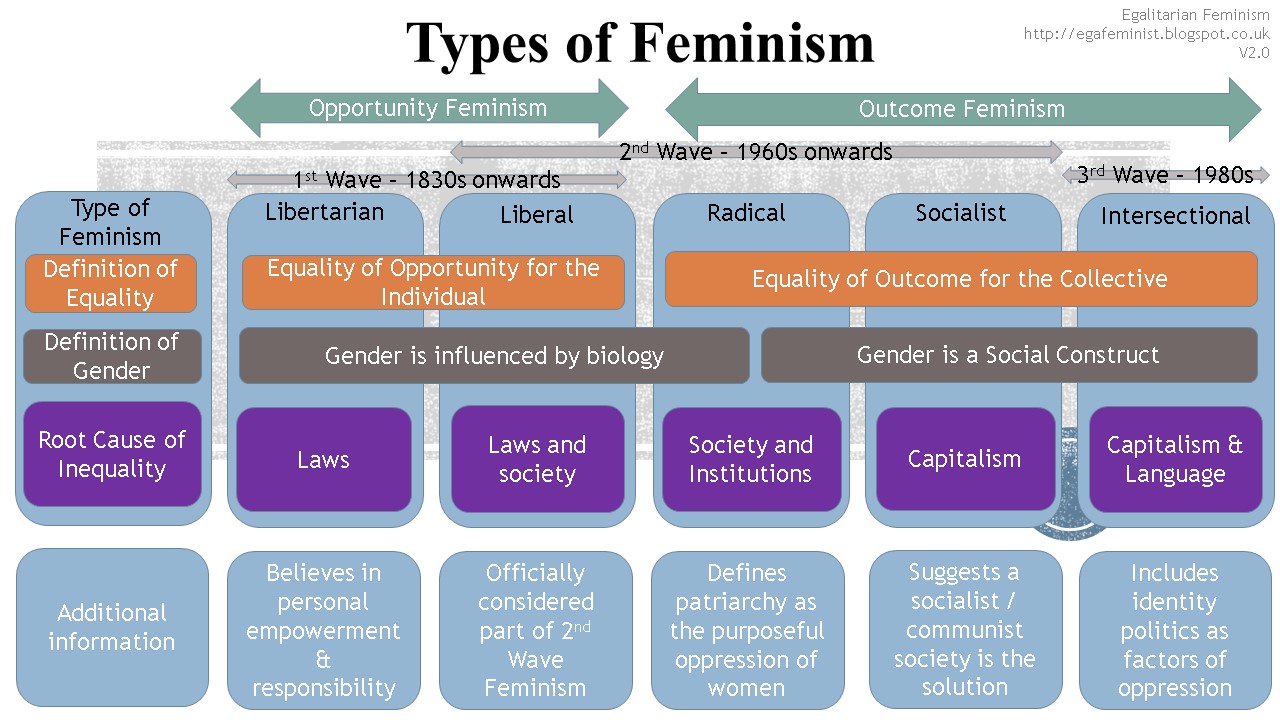 For a very quick overview on the “three waves” of feminism (and a glimpse at why many people in the US today dislike the term feminist), check out this video: Why I Won’t Call Myself A Feminist: It’s Hypocrisy

A feminist lens first began to be applied to literature in the 60s, though scholars, like Virginia Woolf, began looking critically at the role of women in literature much earlier.  The goal for many feminist literary critics is to find misogyny (negative attitudes about women) in literary texts, but the primary emphasis, which we will focus on in this text, should be to simply look for how women are portrayed in the text.

Looking for how women are portrayed in the text often includes searching for common stereotypes of women, or archetypes, such as the “angel in the house” or the “mad woman in the attic.” Feminists look for ways to define the female experience, expose patriarchy, and save women from being the “other.”

What to Look For

Things to think about when studying a text through a feminist lens:

1)  Studies of difference–assume gender determines everything.  How are men and women depicted differently?

2) Power:  views of labor and economics, ie  who holds the power in the text?

3) What roles do women play?

Here’s an interesting video discussing What is Feminist Criticism:

When reading with a feminist lens, it is important to be aware of our own biases. Often, modern readers tend to impose our own cultural values on others, assuming that our way is best. As feminist scholars, we should focus on telling the stories of women, not simply re-writing their lives to suit our own narratives. Setting aside modern proclivities and seeking to get to know authors from the past as women does them more service. By getting to know them, we give them personhood, not because they fit our own narrative, but because each author is an individual who has value.

It is also important not to make assumptions–about the text, about other students in the course, about the instructor, etc.

In this video, Cassie Jaye shares what happens when we don’t acknowledge our own biases and refuse to really listen to what others are saying:

Feminisms from Gendered Innovations at Stanford

Examples of Different Types of Feminism: Libertarian and Evangelical Feminisms

“We are not all feminists” –Edwina Currie’s argument that women do not need to be feminists to succeed in life. An interesting viewpoint that highlights the problem with believing that there is only one type of feminism.We Are Not All Feminists | Edwina Currie | Oxford Union

Though generally author-based and historical criticism are seen as two different categories, for the purposes of the simplification for this text, we are going to combine them together. An author-based/historical critical lens is focused on uncovering the person of the author in a text. Since this text focuses on discovering the voices of women through history, this approach can be very useful in helping us to get to know the women behind the texts we read.

When looking through this ‘lens,’ our goal is to find out as much as possible about the author and his/her life and context. We might read a biography on the author or read about the time in history in which he/she lived. Learning about the author’s life and where and when he/she lived can tell us a lot about a text, and vice versa.

For example, many students have trouble with Emily Dickinson’s poems. They don’t seem to make sense with their strange punctation and fixation on death. But, as we investigate her life, we find that she didn’t intend for her poetry to ever be read. In fact, her poems are like a journal that she kept of her thoughts and experiences. Further, discovering that she lived close to the front lines of the Civil War helps us to make sense of her preoccupation with death.

What to look for:

When studying a text through an author-based or historical lens, think of the journalistic questions:

1)  Who? Who is/was the author? Who is their family? What are the author’s core values/beliefs?

2) What? What is the text about? How does that topic connect with the author’s experiences or the author’s historical context?

3) When? When did the author live? What significant events happened? What was life like? How is the time period significant?

4) Where? Where did the author live? How is that location significant?

5) Why? Why did the author write? Do we know? Was the work in response to something that happened in the author’s life or in history?

Here’s a video on Historical Criticism. The speaker in this video takes a similar approach to what I’ve described here:

Reading Through a Critical Lens by Dr. Karen Palmer is licensed under a Creative Commons Attribution-ShareAlike 4.0 International License, except where otherwise noted.